WHO ARE HUMAN RIGHTS DEFENDERS

“Everyone has the right, individually and in association with others, to promote and to strive for the protection and realisation of human rights and fundamental freedoms at the national and international levels”.

UN General Assembly Resolution, Declaration on the right and responsibility of individuals, groups and organs of society to promote and protect universally recognised human rights and fundamental freedoms, 8 March 1999

Sometimes, defenders are also referred to as “human rights “activists”, “human rights workers” or “social justice leaders”. The term “human rights defender” has been used increasingly since the adoption of the Declaration on Human Rights Defenders in 1998.

The acronym “HRDs” refers to both women and men human rights defenders, in an effort to keep the term broad and inclusive, and with the purpose to further highlight the diverse identities it represents.

We also consider it important to look at HRDs taking into account the inherent collective dimension of human rights defence. As stated by the Inter-American Commission of Human Rights, “human rights defenders also include trade union leaders, peasants and community representatives, indigenous leaders and those of African descent, who carry out activities to demand and promote the rights of their respective populations” (IACHR, 2006)

The right to defend rights includes among others:

In many contexts, exercising the right to defend rights is a risky choice. Many defenders around the word suffer harassment, criminalisation, threats and attacks due to their engagement in human rights defence. When denouncing human rights abuses and violations, defenders often expose themselves to risks and threats. As a result, their rights are seriously violated – not only their right to defend rights, but also their fundamental rights, such as the right to life, freedom of movement, personal integrity, and privacy.

We all deserve a safe environment where we can defend rights without fear of harassment, threats and attacks. In a society where human rights defenders are not recognised nor protected, human rights of all will be negatively affected.

THE ROLE OF STATES IN PROTECTING HUMAN RIGHTS DEFENDERS

States have the obligation to:

Ensure a SAFE ENVIRONMENT for the exercise of the right to defend human rights, by adopting  legislative, administrative and other measures that create a conducive legal framework for the free exercise of rights.

Provide an EFFECTIVE RESPONSE that prevents and prosecutes attacks. States should do so by adopting the necessary measures and mechanisms to guarantee the protection of all people that, while exercising their legitimate right to defend rights, are victim of threats, retaliations or discriminations – regardless of whether these attacks come from State actors or private individuals.

According to the Inter-American Commission on Human Rights, States’ action regarding HRDs includes:

A “public policy for protection of the right to defend human rights” (a protection policy herein) is a set of institutional laws, mechanisms and actions that develop and coordinate concrete actions for State authorities to promote and protect individuals and groups who engage in human rights defence. The core principle of such public policy should be to consider HRDs not just as “objects of protection”, but as “subjects of rights”. Taking this premise as a basis implies that the main goal of a public policy should not be as narrow as to react against attacks and aggressions, but a broader one: to enable the free exercise of the right of every person to defend human rights, and to guarantee the right of everyone to be a human rights defender.

A public policy should thus aim at addressing the root-causes of violence against HRDs (preventing stigmatisation, creating an enabling environment, provide space enough for their activities, eliminate barriers) and not just the “tip of the iceberg” (reacting when attacks occur). 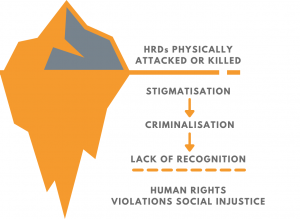 The set of institutional laws, mechanisms and actions forming a public policy should be based on the UN Declaration on HRDs, and incorporate the standards provided by the Reports, Resolutions and Declarations  issued by the various international and regional bodies.

A public policy to protect the right to defend human rights should include:

Monitoring and analysis of:

The obligation of states to protect HRDs has been recognised both by the Inter-American Commission on Human Rights (IACHR) and in the jurisprudence of the Inter-American Court on Human Rights  (IACtHR). Based on PI expert advice in two emblematic cases against the states of Honduras and Guatemala, respectively, the IACtHR rulings provided guidance on at least seven minimum requirements for HRD protection public policies:

Public policies for the protection of HRDs should seek to eliminate the factors that limit the exercise of the right to defend human rights. How does this problem come to be included in the agenda of a particular government? Who defines the dimensions of the problem and how is this done? How are the aspects that are to be included in such a policy decided upon?

The conjunction of several factors can determine whether the problem is included in the political agenda. These include:

Once these factors are somehow present in a given country, a debate on the need of a public policy for the protection of HRDs might arise.

In the roadmap towards an effective public policy, the following elements should be considered to increase chances of success:

The adoption of effective protection policies needs to involve necessarily all relevant State representatives, in a process led by the government.

All key authorities and State actors with a stake in protection of HRDs need to be part of the debate so to ensure a shared analysis of the problem, a common understanding of each other responsibilities and a common space for the search of solutions.

Participation of HRDs and other civil society actors in the design process of protection policies must be real, effective, and voluntary. It must involve all categories of HRDs in a given country. Inclusion must be ensured by facilitating the participation of potentially marginalised groups, discriminated groups, as well as communities from rural or isolated areas. Safety of participants must also be taken into account.

The public policy should be an opportunity to build effective networked governance, as a way to open up spaces for participation to ensure a level of agreement and a shared objective. The public policy should then be built through interactions and negotiation involving the different actors, ensuring that all perspectives and interests are present.

Defining the problem from a structural perspective:

It is very important to avoid reductionist approaches when defining the objective of the public policy, which should not be only to address aggressions committed against HRDs.

A comprehensive public policy should include an analysis of the root-causes of attacks against HRDs, such as organised crime, economically powerful sectors and the co-optation and capture of the state.

The protection of HRDs requires the structural violence they face to be approached using an intersectional approach that takes into account matters including class, economic and gender power, as well as the impact of longstanding discrimination against certain groups.

Maintaining a broad and inclusive definition of HRDs:

“Human Rights Defender”, or HRD, is an abstract term that may be combined with other identities –for instance, a woman, a peasant farmer, educated or illiterate, young or old, urban or rural, etc. HRDs live in diverse situations and realities that condition their experiences.

It is important that public policies consider this complexity and incorporate aspects such as gender and intersectionality, the multiple viewpoints that exist of the HRD, and the diverse identities – HRD, trade unionist, peasant farmer – that they hold.

Including analysis of the perpetrator:

The focus of protection policies should not only be on the individual HRD, in isolation from other social actors. Attention must be paid to perpetrators, who frequently remain “out of focus” as a player. If insecurity of HRDs is to be addressed, the perspective and actions of the perpetrator must be analysed and taken into account.

More from the same region

We are an international non-profit organization that supports human rights defenders in developing their security and protection management strategies. Protection International has been working since 2004 with local partners in over thirty countries across the globe.